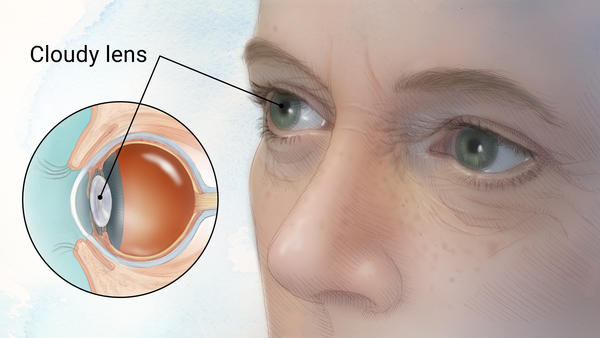 A cataract is a clouding of the lens inside the eye which leads to a decrease in vision. It is the most common cause of blindness worldwide and is conventionally treated with SURGERY. Visual loss occurs because opacification of the lens obstructs light from passing and being focused on the retina at the back of the eye.

It is most commonly due to AGING, but has many other causes. Over time, yellow-brown pigment is deposited in the lens, and this, together with disruption of the lens fibers, reduces the transmission of light and leads to visual problems.

Those with cataracts often experience difficulty in appreciating colors and changes in contrast, driving, reading, recognizing faces, and coping with glare from bright lights

Cataracts may be partial or complete, stationary or progressive, or hard or soft. The main types of age-related cataracts are nuclear sclerosis, cortical, and posterior subcapsular.

Nuclear sclerosis, the most common type of cataract, involves the central or ‘nuclear’ part of the lens. Over time, this becomes hard or ‘sclerotic’ due to condensation of lens nucleus and deposition of brown pigment within the lens. In advanced stages, it is called brunescent cataract. This type of cataract can present with a shift to nearsightedness and causes problems with distance vision, while reading is less affected.[4]

Cortical cataracts are due to the lens cortex (outer layer) becoming opaque. They occur when changes in the water content of the periphery of the lens causes fissuring. When these cataracts are viewed through an ophthalmoscope or other magnification system, the appearance is similar to white spokes of a wheel. Symptoms often include problems with glare and light scatter at night.

Posterior subcapsular cataracts are cloudy at back of the lens adjacent to the capsule (or bag) in which the lens sits. Because light becomes more focused toward the back of the lens, they can cause disproportionate symptoms for their size.

Age is the most common cause.  Lens proteins denature and degrade over time, and this process is accelerated by diseases such as diabetes mellitus and hypertension. Environmental factors, including toxins, radiation, and ultraviolet light, have cumulative effects, which are worsened by the loss of protective and restorative mechanisms due to alterations in gene expression and chemical processes within the eye.

Blunt trauma causes swelling, thickening, and whitening of the lens fibers. While the swelling normally resolves with time, the white color may remain. In severe blunt trauma, or injuries which penetrate the eye, the capsule in which the lens sits can be damaged. This allows water from other parts of the eye to rapidly enter the lens leading to swelling and then whitening, obstructing light from reaching the retina at the back of the eye. Cataracts may develop in 0.7 to 8.0% of cases following electrical injuries

Ultraviolet light, specifically UVB, has been shown to cause cataracts, and some evidence indicates sunglasses worn at an early age can slow its development in later life.  The lens filters UV light; so once it is removed via surgery, one may be able to see UV light. Microwave radiation has also been found to cause cataracts. The mechanism is unclear, but may include changes in heat-sensitive enzymes that normally protect cell proteins in the lens. Another possible mechanism is direct damage to the lens from pressure waves induced in the aqueous humor. Cataracts have also been associated with ionizing radiation such as X-rays. The addition of damage to the DNA of the lens cells also has been considered.  Finally, electric and heat injuries denature and whiten the lens as a result of direct protein coagulation.  This same process makes the clear albumin of an egg become white and opaque after cooking. Cataracts of this type are often seen in glassblowers and furnace workers. Lasers of sufficient power output are known to damage the eyes and skin.

Cigarette smoking has been shown to double the rate of nuclear sclerotic cataracts and triple the rate of posterior subcapsular cataracts.  Evidence is conflicting over the effect of alcohol. Some surveys have shown a link, but others which followed patients over longer terms have not.

Some drugs, such as corticosteroids, can induce cataract development.